We’ve spent 12 days travelling the north island of New Zealand. We started our trip in the peninsula of Coromandel. Lucky with the weather we were greeted with amazing views of the coast, green valleys and mounts. After two nights in the area and crossing the peninsula from west to east, we made our way down to the “shire” to visit the famous Hobitton movie set of Lord of the Rings. It is a rather pricey visit, especially after all the money the movie brought, but it was hard to resist the temptation now that we were there! The convincing argument was that the price included a beer in the Green Dragon bar and it was quiet a cool experience in the end. I wouldn’t say that we are major fans of the movie but we like it, and walking through the 40 Hobbit holes that were built for the movie was really fun. After our visit we found a great spot to spend the night, down by a river near a farm in company of cows.

Before heading to Tauranga to pay a quick visit to Jenny, a childhood friend who now lives in New Zealand, we went for a walk along the Blue Springs, a crystal clear water source that provides 70% of bottled water to the country. The water is so clear it is almost tempting to drinking directly from the source…

From Tauranga, we drove to Rotorua, famous for the hot pools where we didn’t hesitate much to go relax in, and then Taupo lake.

We were very excited to continue our route to the Tongariro National Park (also famous for being playing the role of “Mordor” in LOTR) to do the famous alpine crossing hike. Unfortunately, the weather was not with us for once, heavy snow was forecasted for the coming 3 days with low visibility. We were advised not go on the hike, and our POW not being equipped for snow, we didn’t take the risk and decided to continue our way south to find more welcoming temperatures. It was a beautiful drive through the National Park though, and even if we hardly got a good glimpse of the Tongariro peak, the changing landscape was impressive. 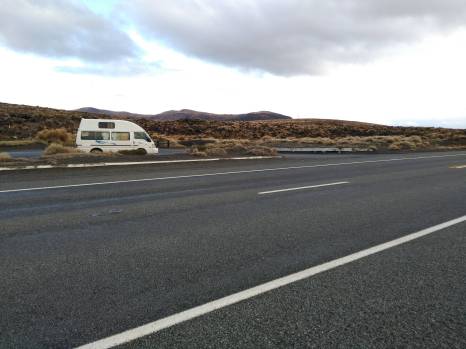 Our ferry ticket to cross to the southern island from Wellington was scheduled on the 12th of September. We had a really nice ride from Tongariro all the way down to Wellington stopping in quite a few nice places with our POW.

On the road, we passed in a tiny town east of Palmerston North to do a bit of laundry. Our great mobile app, Camper Mate, that tells us where to find anything had located a laundromat there. The place was creepy at first, located at the back of an old Pub/Hotel but we eventually ran into the owner, an old man, who invited us for hot coffee by the fireplace in the pub, with the company of his cat, Blakie. We spent a good 2 hours with him, chatting about everything, and it turned out he was a customer of Vistaprint and was very happy to know that people in sunny Barcelona were making his business cards!! (Although I had to insist I did not make them personally and they were not shipped from Barcelona… but it seem to make him happy anyway). 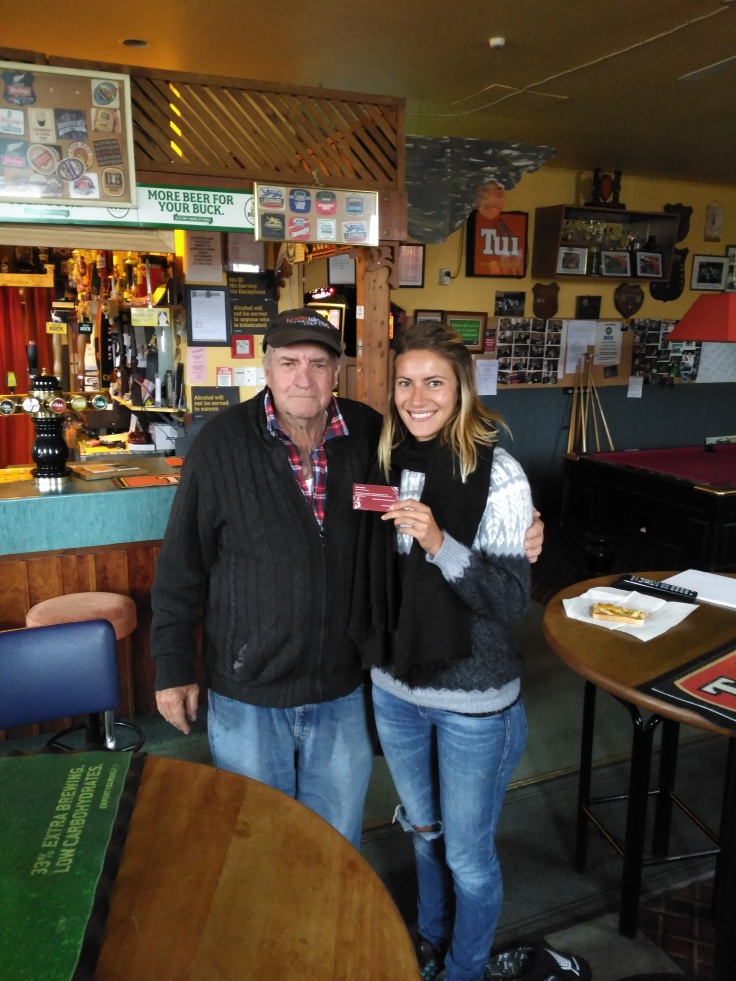 We drove all the way down to Cape Pallisier, a remote village on the coast at the very bottom of the island. We had a beautiful walk by the beach, this time in company of Seals, all the way up to the light house from which we could almost see the south island.

It was a perfect road trip all the way from Auckland down to Wellington in the green lands of New Zealand. It was a short stop over of a day in Wellington, mostly to hang out at McDonald’s to get a free internet connection. We are still pretty stunned to see how difficult it is in NZ to get a Wi-Fi connection… But at least it’s a real disconection!