We wake up at 7.30am. It is very cold in the room. Luckily, the blanket was very thick and kept us warm during the night. Mai is back from the funeral and has already prepared breakfast. We feel bad when she tells us she was up all night and only got one hour of sleep, and now she is cooking pancakes for us. We feel terrible but she insist that everything is okay, in fact, her friend is on her way to take care of us while she has to go back to the funeral. We give her a big hug and off she goes.

A few moments later, her friend arrives. She is just as small as Mai, she looks a little younger and tougher. Her name is Sang. Our first impression is that she doesn’t seem as friendly as Mai while she explains the itinerary for the 2 upcoming days: today we will walk all the way to My Son where we will sleep in a homestay. We will pass through Dzay and Dzao villages on the way. Tomorrow, we will walk to Nam Cang, a Red Dzao village, we will see a waterfall and walk in the mangroves.

I am very surprised to hear about mangroves in the middle of the mountains, it sounds exciting but strange! I want to know more about the mangroves but I don’t dare asking her as she rushes us to finish our coffee and pack up our bags before we make ourselves on the way.

While we are walking, she starts the conversation: She is curious of where we come from, what we do, and starts to tell us stories about the village, usually involving drunk people…. After about an hour walking with her, we realise our first impression was wrong. Sang is adorable. She is the opposite of Mai for sure: If Mai is very calm, with a soft voice, Sang is very energetic, bubbly with a high-pitched voice and she likes to laugh! She is the same age as me and has already 3 children, but she has the heart of a child. 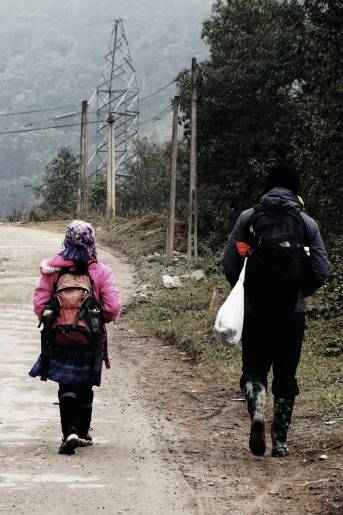 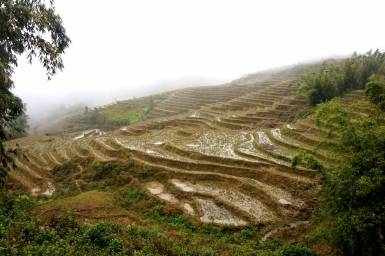 We are surprised her English is so good: she, like Mai, have never had english lessons. They actually don’t know how to write or read. They have learned phonetically on their own by being in contact with tourists. For that, their level is impressive, they speak better English, with a better accent and pronunciation than Vietnamese guides we’ve had previously who learned in school….

Sang had some funny expressions though, mispronunciation that are very cute:

While we walk through the rice terrace, the landscape is incredible. It is not that cold while we walk and the weather has cleared up slightly. We stop a few times when we pass through villages. We hear Sang speaking with the locals several time. It sounds like a lot of gossiping but we are not sure, so eventually we ask her. She says people are asking about Mai’s nephew. Many people have seen her husband working with a few man yesterday to bring the body back to their village, so they are curious to know what happened. 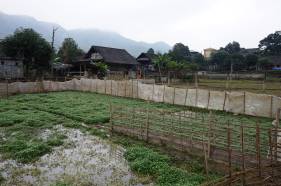 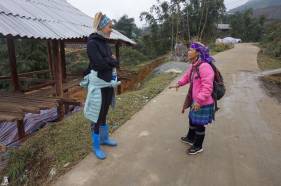 Since it was delicate to ask Mai directly, we openly ask Sang what she knows about it:

He was a farmer of only 18 years old, middle son with an older brother and younger sister. Their father passed away a few years ago, and their mother left them as she found new love in China. They are very poor, with very little earning, no money for education and very few belongings. With the little he had and no more parents, there was none or little chances for him to get married (since in Hmong minorities, the men‘s family pay the girl’s family so that he can marry her). He might have liked a girl he knew he could never marry. His life was to tough for him so he must have decided to commit suicide but eating poisoned leaves.

We are stunned by the story, which leads us to so many different topics on how people live in the area and it is very shocking and sad to hear all the stories she tells us.

And as we walk up the mountain, Sang teaches us to recognise this poisoned plant, just in case... The leaves are deadly if eaten, even in small quantity.

As we go down the mountain, we change to friendlier subjects. We still have goosebumps from the stories we’ve heard!

The way down to the village is steep. Adrien and I are walking down quite slowly with our gum boots, but Sang is running downhill easily. Adrien tells her as a joke that she would be really good at running the Gloucester competition that takes place in England, during which a few men run down a hill after a rolling cheese. As he goes on about the competition, Sang can’t stop laughing. She can’t believe a bunch of guys would run after a cheese, only to win the cheese! She laugh so much it is contagious ! 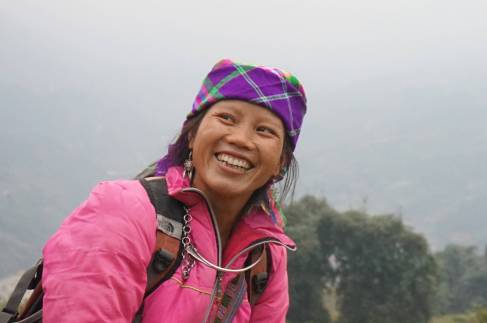 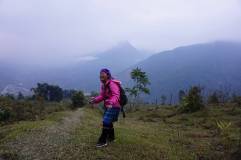 When we finally arrive at the homestay that evening, she can’t wait to see a video on Youtube, and when we find one, she is stunned and cry of laughing. She even shows the video to the hosting family.

We are happy we made her night! 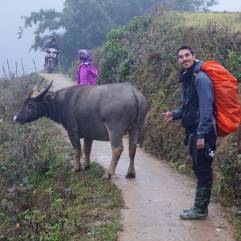