We stayed 10 days at my father’s place in HCM city over Christmas. It was so nice to be with family again after all this time travelling, it felt good, it felt at home and cosy. My uncle, aunt and cousin who happened to be on holiday in Singapore also joined us for a few days.

The city itself doesn’t have that much to offer for tourism. It is noisy, busy and hot. I would say that tourists usually spend only about a day or two, visit the old Post Office, the Cathedral, experience the buzz and crazy traffic, and eventually go all the way to the Cu Chi war tunnels.

But for us, our HCM stop was the perfect occasion for a nice family reunion and a break from our backpacking life!

So after this break, it was time for us to move on, hit the road again and make our way to Cambodia.

A few years back, I had taken a trip by boat with my father, along the Mekong river all the way to Phnom Penh. I had a good memory of it so we booked a similar excursion with The Sinh Tourist agency (previously known as Sinh Café), the one low-cost travel agency you can trust for tours around Vietnam.

Meanwhile, the Typhoon Tembin that crossed the Philippines over Christmas was now threatening the south of Vietnam. We were a little surprised…. up until now in our trip, natural disaster happened only once we’d left the country (earthquakes in Chile, Peru and Mexico, the hurricane in south Mexico, the fires in LA, the volcano in Bali…). This time, it sounded like we might find ourselves in the middle of a Typhoon…

The city was getting ready, there even were warning signs in the elevators of the building… But luckily, the news made it bigger than it was: after unfortunately making a disaster in the Philippines, the storm lost its strengths over sea and made its ways further south and into Thailand with not much more damaging consequences.

Until the last-minute though we were worried our trip to the Delta might be cancelled, but except for a bit of rain and strong winds it was all good and we left HCMC on the 26th.

Our guide, Mr. Chung, was on top of the schedule! Everything was planed by the minute, like a military schedule: In half a day, we drove south to the town of Cai Be. We were supposed to visit the floating market there, but it had been cancelled due to the strong winds. Instead, Mr. Chung planned for us to  visit a honey farm. Which was okay, even if we would have preferred to see the market. We then took a boat to reach a smaller island where we stopped at a local workshop where rice paper and all sorts of coconut products were made (candy, oil, flour…). We went for a small cruise on a rowing boat through some more narrow canals, and then were brought by horse carriage to a bar were we were given a demonstration of Vietnamese traditional music.

Not our favourite so far! The situation was actually quite a funny: all of us tourists were seated at tables in front of the “stage”, but we could also see right next to the stage what we guess was the “backstage”: the performers were sitting around a table and preparing their make-up, hair etc…

The singers went from performing on stage, to sitting down backstage redoing their make-up, having a snack or a smoke, right in front of us (and having a chat for some)…  The whole thing made it hard to focus 100% on the performance… 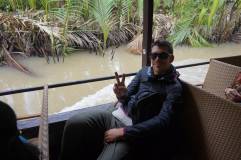 It was a compact and speedy programme for a half day but we still had a long drive to reach Chau Doc, from where we would take a speed boat the following day to reach Cambodia.

The agency had organised a night in a very descent hotel in Chau Doc, a city where people stop mostly to take the boat.

We had dinner with the group in a local restaurant and called it a night.

The next morning, only a few of us were leaving for Phnom Penh, the rest of the group was continuing the guided tour. We were brought by pousse pousse to the deck and boarded the fast boat and made our way up the Mekong river toward the border.

Now that was the most interesting part of this 2 day trip; sliding on the river for 5hours, watching life happening on the bank of this immense river…

We reached the Vietnamese border about 1hour after we left. We disembarked the boat to get through customs, get our exit stamp and one last Vietnamese coffee, and went back on board for only 5 minutes until we reached Cambodia. We waited a long time at this border until everyone had their paperwork for visa done, but eventually made it back on the boat for a few more hours. 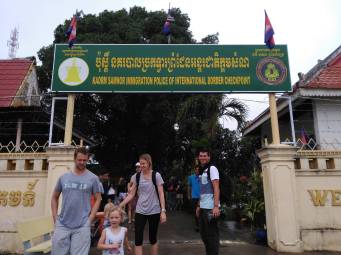 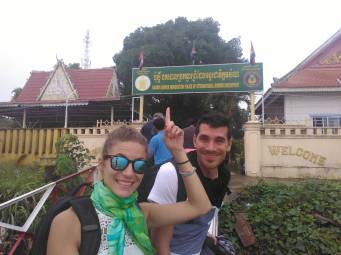 It is incredible to observe the activity that is happening on the Mekong. There are so many boats  of all sizes, from the massive ones that dig out sand from the bottom of the river, to small fisherman’s boats. Every one on the river seems busy with their own business while we are cruising along, sort of in transition,  travelling from one country to another… 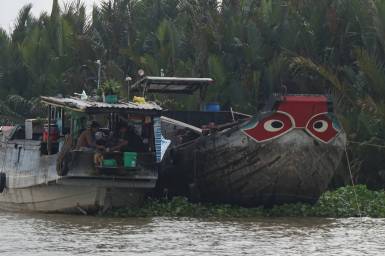 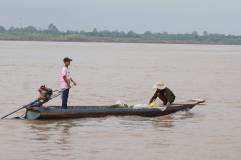 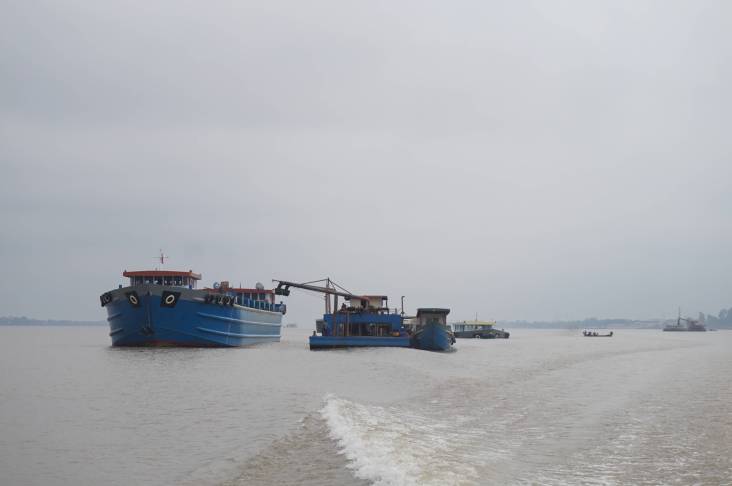 After a few hours, Phnom Penh was at sight!