We are officially loopers: we completed the 450km circuit around the famous Thakhek “loop”!

Also called the Konglor loop, it is one of the must do’s in central Laos: a 4 days motorbike adventure through mountains, farmlands and multiple remote villages. A trip during which caves, spring pools, lakes can be explored including of course the amazing Konglor cave. Riding around the loop will remain a memorable experience we can only recommend to anyone travelling to Laos, with some of the most incredible sceneries we’ve seen in the country.

With the brand new motorbike we rented from Wang Wang rentals in Thakhek and our paper printed map from the KGB backpacker, we were ready to go. We left our big backpacks at the hostel reception (just like everybody else) and hit the road! 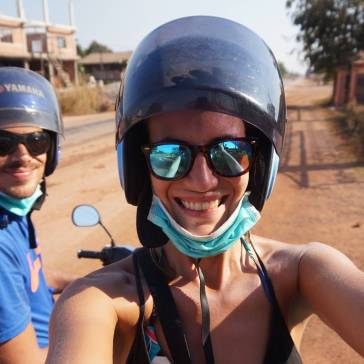 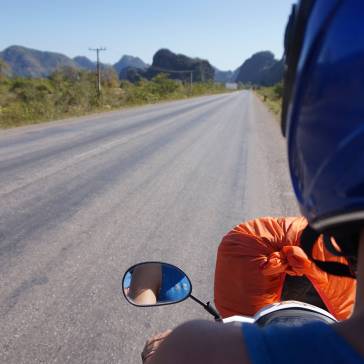 The ride was amazing, we quickly left the city behind us and found ourselves in the countryside in a decor of limestone cliffs. We stopped first at a Buddha cave which was nothing impressive but where we met another French couple we followed for the rest of the day. We then headed to Xien Liab cave, a little more difficult to find but impressive once we got around the entrance. We walked and climbed our way through it to come out on the other side to a small river, and then back again to continue on ridding.

The first night we stopped where everybody seems to stop: Sabaidee Guesthouse. We were a bit in the hurry towards the end since it was getting darker and we wanted to make sure we’d have a room there. On the road, we kept on racing against 3 other bikers on the last kilometres of the finish line, continuously overtaking each other while one stopped for photos, we stopped to put on our jackets, then they did etc… All bikers who start the loop to the East (yes, I like to call ourselves bikers now…) arrive in Thalang village after the first day. We arrived right on time for the last rooms for us, the French couple and the 3 other bikers we had been racing against. From our entire trip, we’d never seen so many French people! It was unbelievable and seemed they had all gathered here at Sabaidee Guesthouse!! The place was great though (maybe a bit annoying for non-French speakers!). It really looked like a biker’s reunion with all the bikes parked at the entrance (except they were no Harleys…). The owner organised a BBQ buffet around a fire pit outside, it was a great atmosphere! 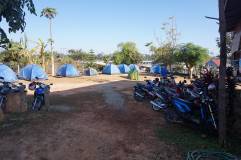 The next day we had a long road ahead of us so we left in the early morning. The air was still cold and the landscape mystical as we road around the lake. After we passed Laksao, we stopped at the cool springs where we happily jumped in the clear blue and cold water. We also wanted to stop at Na Sanam waterfalls but never saw the entrance (which was for the best: the same evening the French couple told us they stopped and walked for 2 hours but never found the falls!!). The last 40km from Nahin to Konglor felt like eternity. It was one long straight road and it was terribly hot, but it was breathtaking. 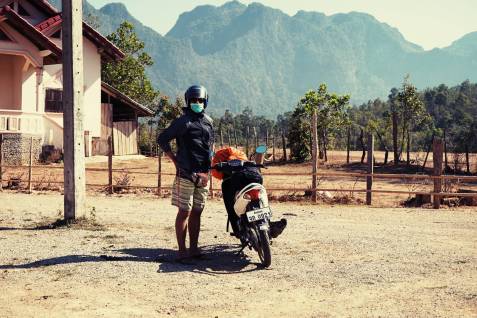 We finally arrived in the last village before Konglor Cave and found a room available at Eco-Lodge Konglor. It was so peaceful in the village, the kids where coming back from school and were greeting us with big smiles and big “Sabaidee” and the landscape of dry rice fields and mountains was beautiful.

The next morning, we visited the main attraction of this loop: the majestic Konglor cave. It was discovered only in the 90’s and is the largest cave in Laos. It is so big that the Hinboun river flows from one side to the other for almost 8km! For 120,000 kip we hoped in one of those small wooden boats that brought us at all speed in the pitch dark cave on the serpentine like river. It was a really spooky feeling being trapped under the mountain, it was very dark and hard to see where the boat was taking us. We’d forgot to take our headlights so all we could see was the small hallow of light from the boatmen’s torch going from left to right to check where he was going. The first few minutes were pretty scary, we couldn’t help to bend our heads of fear to hit a rock…. but eventually our eyes got used to the dark and could focus enough to see the high ceilings. The air trapped was warm at the start and got more cool as we went deeper and deeper into the cave. We stopped at one place where we could get out of the boat and walk through a chamber of curious rock formations, then got back on board to go all the way to the other side of the cave and back. It was a unique experience, and one of those discovery that make you realise how curious nature can be. 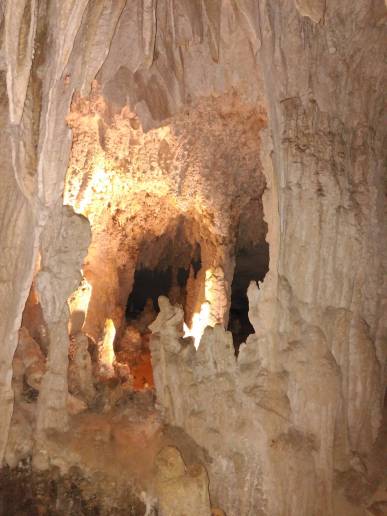 We lunched back at the village before heading for the last chunk of the loop. A lot of people actually go back the same way they came and don’t complete the loop: that is because there isn’t anything to visit on the last bit, and about 30km through the mountains is said to be dangerous. We took that road, and there is a little bit more traffic than on the first part of the loop but it is definitely not more dangerous than the rest. We stopped somewhere about 50km away from Thakhek, in a village that had only 2 hotels. All electricity was gone in the village so we had a candle dinner in a local restaurant by the side of the road. 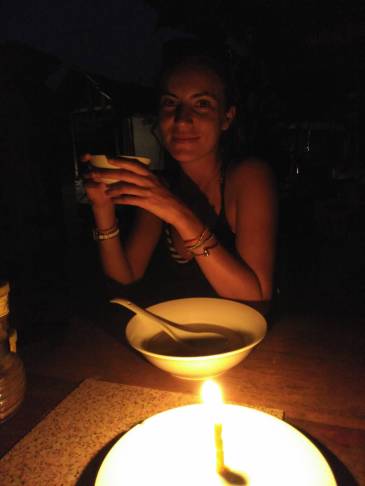 We closed the loop the following day and back in Thakhek we chilled for the rest of the day while waiting for the night bus that would bring us to Vientiane.