We cycled two days in and around the crazy traffic of Mandalay. We reached the city after a long mini van journey from Inle, which was really nice for us but was hell for all the other local passengers who felt sick several times as we passed through the winding mountain roads….

Mandalay is fairly big and rather expensive. We walked around the centre to find an accommodation and settled for a hotel which cost us 19$/night, but at least was very nice. After a good night rest and a generous buffet breakfast, we took the hotel’s free bikes and went for a tour of the city. Cycling around Mandalay might not be very common yet for tourists because we got a lot of surprised looks on the way. Also, cycling around this city is not be for everyone… it is pretty stressful but once you get into the flow of cars and motorbikes and focus on staying on the side of the road it is enjoyable. 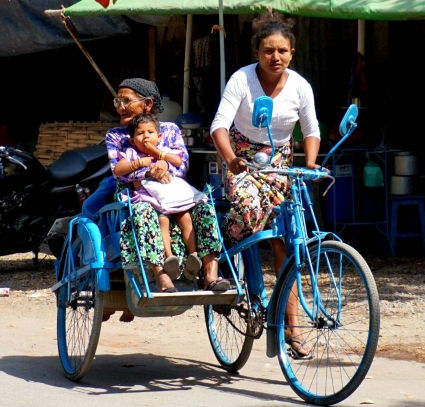 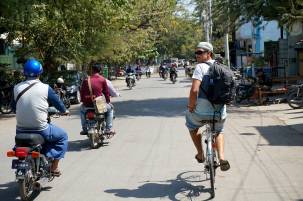 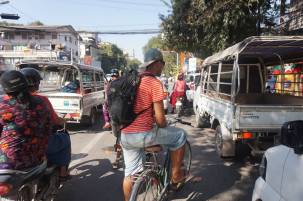 We passed a few temples, stopped at the jade market but it was late already and closing. On the bright side we didn’t pay the entrance fee and still got to see a few workers manipulating the precious stone. 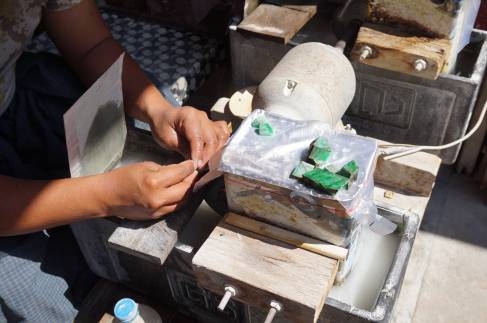 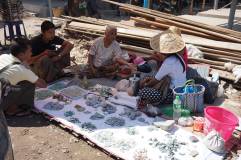 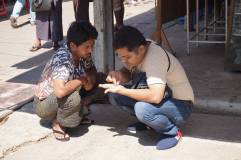 We passed around the main market which is a busy place, so we dropped our bikes and walked around the flower, fruits, spices, vegetables… 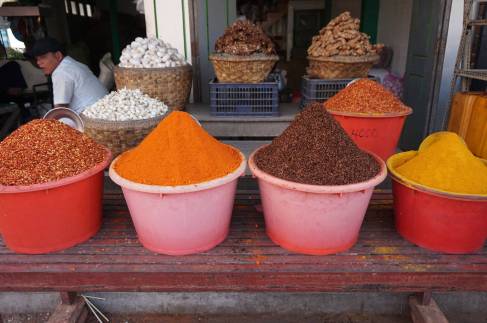 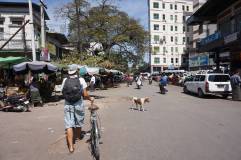 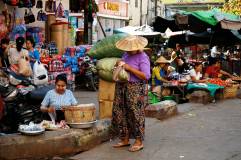 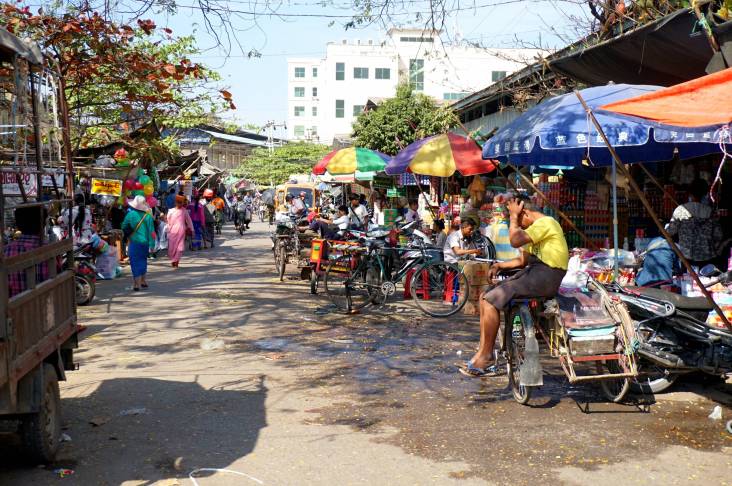 We wanted to cycle through the Mandalay Palace garden but weren’t able to enter on the side we were standing. So we went all the way around it and realized just then how big it is, so we didn’t decided not to make the stop and headed to Shwenandaw Monastery, a beautiful piece of art! And then got lost between the hundreds of bright white stupas at the Kuthodow Pagoda. 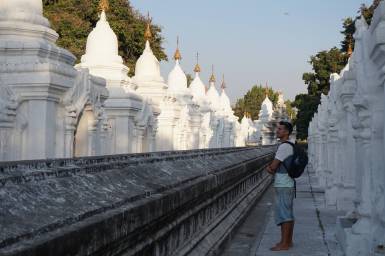 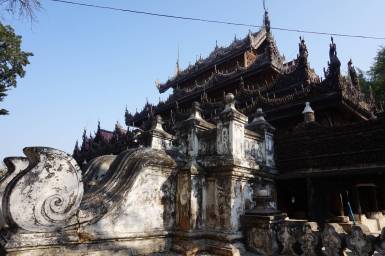 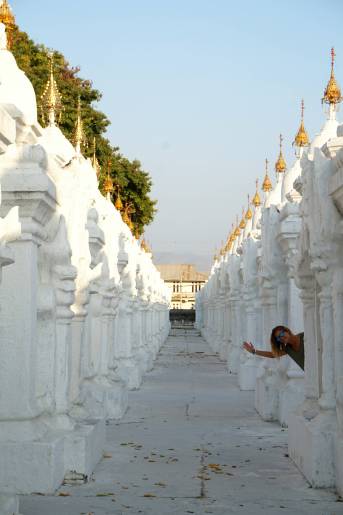 Finally we biked up the Mandalay hill for sunset (or should I say we pushed our bikes up the steep hill for 45 minutes!..). 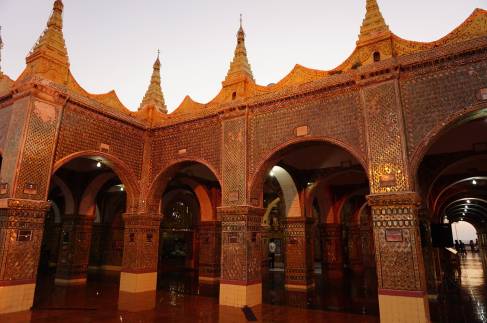 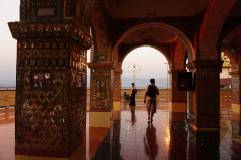 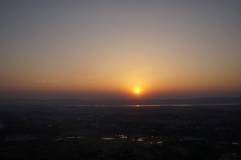 The way back was really nice, the temperature had dropped and the air was cool again. When stopping at red lights people were smiling and talking to us, asking where we came from etc… It was a nice evening.

The next day we cycled all the way to Amarapura and crossed the U Bein bridge. On the way, we discovered the outskirts of the city, much more quiet and rural. The lake was almost dry so the landscape was different to what we had imagined but still pretty. It was such a hot day that we got back to the hotel to enjoy the AC of our room for the rest of the afternoon… 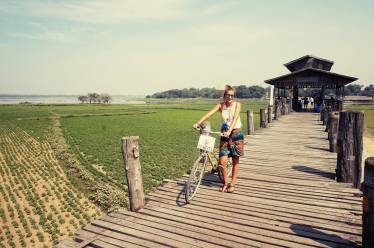 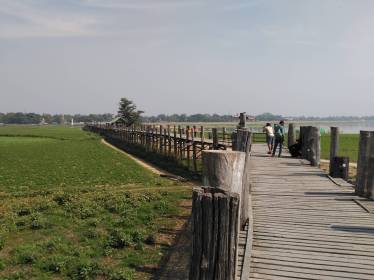 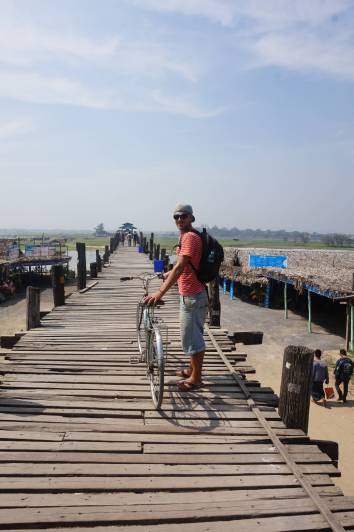 That same evening, we made a very fun encounter: the local restaurant we went for dinner was pretty busy so the waiter told us to sit at a table where an older man was having a beer. This man didn’t seem much bothered by our company and instead started to speak with us… in Burmese! He didn’t speak a word of English but somehow, we manage to have some funny conversations with him over dinner! There was a lot of laughing on both sides of the table. Adrien swears he understood what the man was saying…. we ended up speaking with mimes and drawings. It must have looked quite funny because people at the neighbouring tables were taking pictures… This man was so happy to meet us (our waiter eventually translated that for us), he wanted to pay for our dinner (which we refused)! I think we made his night! Before leaving he told us to wait and left for 5 minutes. When he came back he held a plastic bag to us as a gift: it was 3 betel leaves with tobacco, one for each of us. I had to explain without offending him that I really didn’t want any… but he had gone through the trouble of buying them and seemed already so upset that I refuses that Adrien, brave enough, stood up for me: he took a folded leaf and put it on a side of his mouth. We said goodbye to this funny man and left. Adrien waited to be around the corner of the next street to spit away he nasty leaf!